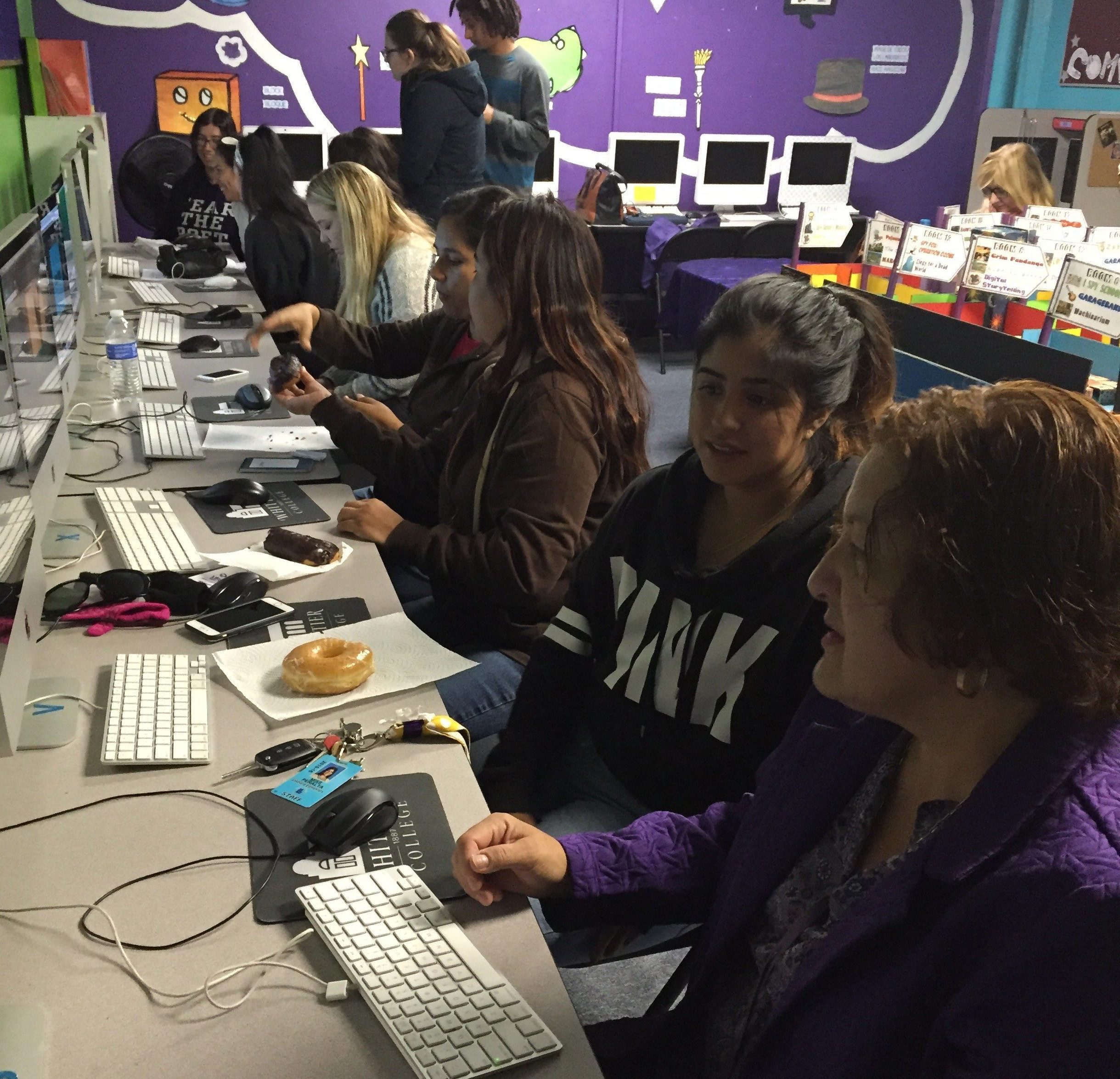 This semester I was invited by Sofi Cervantes, who teaches a class in social work at Whittier College to partner with her students and the Fifth Dimension learning program at the Boys & Girls Club of Whittier to help parents from a neighboring elementary school create digital storybooks as part of a family literacy initiative.  Our goal is to help parents increase their digital literacies or as Stephanie Carmona, who is the parent coordinator for the Fifth Dimension calls it, clases de computadoras.

Sofi, Stephanie and I met early in the semester to think of a theme that parents could design a digital storybook around.  Sofi and Stephanie are graduates of Whittier College’s social work department and they are both well known and trusted in our community.  We decided that our prompt for parents would be to have them create a story about their child.

At our first meeting we did a round of introductions and asked parents what they wanted to learn.  A mother of a second grader said she worried about her son’s reading abilities and wanted to learn to help him.  She mentioned some websites that were recommended to help her understand the new Common Core state standards but didn’t know how to do searches on the internet.  Another mother walked in a few minutes after we had started and apologized.  She was coming from an early morning class she takes to learn English.

After more introductions we were ready to help parents set up email accounts and get started creating their digital story books in Haiku Deck.  We chose Haiku Deck for ease of use.  Before we got started one parent asked how to turn on the computer and another asked how the mouse worked.  I also quickly realized I have a technical language barrier.  I had agreed to give the workshop in Spanish or to translate most of it from English but I had challenges translating the technical terms.  The parents chuckled a few times when I called the computer mouse, el raton asking “where?!” as if a mouse was running on the floor and another parent corrected me when I mentioned social media and asked if anyone uses Facebook.  They said oh, “el Face?!”

By the end of our first meeting we hadn’t quite gotten started on creating our digital books but we were all smiling and laughing about what was lost in translation.  We found that by our next meeting we all knew each other better and there was some ease and trust in asking questions- any questions- from how do you say arcoiris in English to how do you spell rainbow.

“I’ve learned that we don’t only need books to read stories to our kids but we have our own stories and we can use these tools to help us express our feelings and our experiences.”

In our second workshop we addressed digital literacy: Sofi and I explained to students and parents that while we had chosen the web-based application Haiku Deck because it produces simple yet elegant presentations, it does require signing up for a free account that made their decks public and searchable. There are paid subscriptions available for this tool but we currently don’t have a budget to cover any technology costs.  We discussed ideas to keep their privacy, anonymity and to use pseudonyms if they wished.  Some parents chose pseudonyms, others used their names but gave their projects obscure titles. We also asked parents to sign non-mandatory permission forms allowing us to take their pictures and to share images on websites and blogs.  Images from our meetings and workshops can be viewed here.

During the last taller or workshop, the parents presented their digital storybooks to our group. The stories were personal, heart-felt and described feelings of love, appreciation, challenges and fears.  Parents also described the experience of using digital technologies to make stories that could express their range of feelings using computer generated pictures and text.  They described it as a process of breaking language barriers through visuals–especially valuable to Spanish speaking parents.  “I’ve learned that we don’t only need books to read stories to our kids but we have our own stories and we can use these tools to help us express our feelings and our experiences” a parent told the group. Another parent described her fear of having limited literacy skills and saw this experience as an opportunity to use this application to write and visually describe the stories she wants to tell and pass down to her children. Another parent saw this as an opportunity to help her second grader build his English language abilities by writing a story with pictures and text on the computer.

Norma, one of the parents who made a story offered her thoughts and said this project gave her reflection.  Family and community was a common theme in all of the stories but they each had their own personal narrative.  Parents also commented that they wish they had more time to work on these types of projects.  Stephanie is working to increase computer lab time for parents at the Fifth Dimension and asked some of the parents if they would be willing to lead upcoming workshops.  Most parents agreed that they needed more practice but all said they felt more confident in working with a computer.

As we said our goodbyes on the last day of the workshops I asked the college students what they thought of this experience.  One student remarked that he would not likely remember the parents by name but he wouldn’t forget how their stories made him feel.