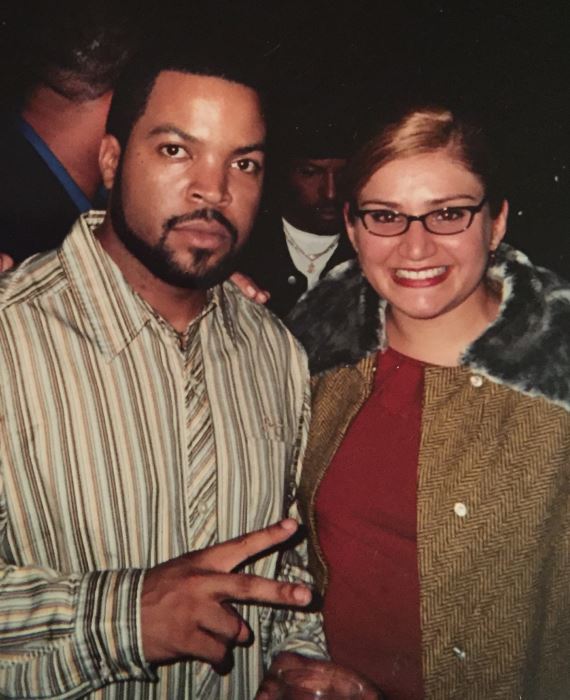 I recently read Anne Helen Petersen’s book Too Fat, Too Slutty, Too Loud: The Rise and Reign of Unruly Women.  At times I felt empowered and other times I was filled with frustration. The book is a set of profiles of women who have reached ground-breaking levels of success but not without heavy scrutiny. These women have attempted to break gender, race, and cultural norms by staying inside the cones of what society deems acceptable–the known, the safe- just long enough to then swerve out and chart a new course for themselves. There are still many bumps in the road.

The chapter in Petersen’s book on Nicki Minaj stayed with me.  It made me question what I like vs. what I think I should like.  It’s complicated. Petersen reveals a multi-faceted powerhouse in Nicki Minaj who has changed the rules of the hip-hop game on her own terms. What I knew of her before is what I think most people know of her–the costumes with the bright wigs and sexy clothing, the silly lyrics (I secretly LOVE “Starships.”), and the Anaconda video which apparently broke the Internet.  I couldn’t figure Nicki out and I too wanted to place her in one of the categories that Petersen lists in her book:

“The ‘Righteous Queen’ (Lauryn Hill, MC Lyte, Salt-N-Pepa, Queen Latifah), whose music offered positive messages of empowerment and self-love, and the ‘Gangsta Boo’ (Lil’ Kim, Foxy Brown, Eve), all of whom were linked with a male rapper ‘mentor’ figure, and whose lyrics focused on crime and sex. But Minaj–like Missy Elliott, another iconoclastic artist to whom she is often compared–complicated the dichotomy of Righteous Queen or Gangsta Boo. She cites Lauryn Hill as her most significant influence, yet her early raps, and the artwork that accompanied them, place her with the lyrical lineage of the Gangsta Boo.”

I suppose the chapter on Nicki Minaj stood out to me because I weirdly felt vindicated for liking rap music.  Nicki represents a strong woman, a boss with total creative control.  It’s been difficult for me to admit that I like rap, well some of it, especially the songs with the heavy misogyny, the bitches and hoes lyrics that I’ve overlooked because I like the beats and rhymes that accompany them.

This past August, BET published an article titled Hip Hop Hates Me: The Complexity in Being a Woman ‘For the Culture.’  It included a tweet by Ava DuVernay:

My hip-hop jams are special. I know the words and I rap out loud when I’m driving alone. I can’t play the non-radio edits when my kids are in the car.  It’s not just the cussing.  Am I complicit in this misogyny for liking rap music?

So what about women in rap? How can they be a part of hip-hop culture without accepting the abusive language and at times the lifestyle that objectifies us? Could it be as simple as being a woman who makes music that people like?

Last Sunday, The New York Times Style Magazine published a set of profiles titled The Greats.  Roxane Gay does an interview with Nicki Minaj where she describes her triumphs and struggles:

“I had so much going against me in the beginning: being black, being a woman, being a female rapper. No matter how many times I get on a track with everyone’s favorite M.C. and hold my own, the culture never seems to want to give me my props as an M.C., as a lyricist, as a writer.  I got to prove myself a hundred times, whereas the guys that came in around the same time as I did, they were given the titles so much quicker without anybody second-guessing.”

Some have disqualified Nicki Minaj’s music from the rap genre. Or hip-hop. I have to admit that  I looked up how the Internet was describing each.  M.C. and rap philosopher KRS One, which I jammed to at Coachella in 2002 describes it like this:

If we’re talking about greats in rap then women lead my playlist. Before hip-hop was likely coined (or before I heard of it) I was rapping to…white women! Blondie’s “Rapture” and Teena Marie’s “Square Biz” were my first rap songs.  People were also confused–is Blondie more like  Disco, Teena Marie more Soul/R&B/Funk?  Almost 40 years later, people are still trying to put us into a category.

So I don’t care which category Nicki Minaj falls into; Gangsta Boo, Righteous Queen, rapper, hip-hop or pop artist. Why can’t she be all of them? Or none of them?

She’s in control of her music, her style, and her business.  As Petersen puts it:

“That’s the thing about Minaj: she understands, like few celebrities before her, how to get people to tell her story, pay her attention, appreciate her artistry, propagate her message, acknowledge her mastery–and all of it on her terms.”

The kind of rap I still enjoy is referred to as ‘old school’ now.  Urban Poetry I would say when people would question my taste in music.  When the social annotation website RAP GENIUS (now just Genius) came out I spent hours reading through the meaning of songs.  Something I wish I had when my 10 year-old self rapped to:

“Ticket to ride, white line highway, tell all your friends they could go my way, pay your toll, sell your soul, pound for pound costs more than gold. The longer you stay, the more you pay, my white lines go a long way, either up your nose or through your vein with nothin’ to gain except killing your brain.”

I didn’t know what this song was about and neither did my neighborhood friends from Lynwood, CA.  All we knew is that Grandmaster Flash & Melle Mel were our boom box gods!

I am now a “grown ass woman” as Nicki Minaj would say.  Sometimes I feel like I have more questions than answers about how societal structures are built and how women take part in them.  Sometimes it helps to read how Nicki Minaj and other ‘unruly’ women are owning their style and their status to take control.  It always helps when I put on my jams and listen to the power of women’s voices: